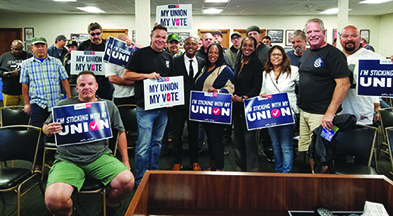 Led by Gov. Jerry Brown, California’s Labor and Workforce Development Agency released some new numbers on apprenticeship last month. They ought to give working people a good reason to vote on June 5 for candidates who historically have kept workers’ interests foremost in their minds.

Thanks to the commitment from the Governor on down to elected officials at the state and local level, California’s apprentice workforce has climbed to an all-time high of 82,000. Most impressively, the state has added 29,000 new apprentices in just two years. Now, we’re on track to increase the number to 100,000 by 2020. No other state is even close to California’s progress in building the skilled and trained workforce of the future.

These things don’t just happen by accident. They result from focused political activity by labor organizations such as the State Building Trades, aimed at the people who set the policy, pass the laws and enforce the rules.

They are a product of labor’s success in California, supporting political candidates who think first about the needs of working families. We build our relationships with them from the moment that they first run for local office. We get to know them, and they get to know us. By the time they make it to Sacramento, their knowledge of the Building Trades runs through their DNA. They don’t have to be convinced on the issues—a strong economy with fair wages that give working families a chance to own their own homes.

Over the past eight years, these men and women have given us fair hearings in the state’s legislative chambers, as has Gov. Brown and his appointees. They have enacted and enforced pro-worker policies. Their decisions have resulted in higher pay, bolstered pensions and better health care packages, for our members and for all working people, whether they belong to our affiliated unions or not.

These officeholders know that when working people make a decent living, it drives the economy for everybody. They know how crucial it is for California to improve and rebuild its infrastructure, how it provides for the delivery of goods and supports a strong economy. They know that we as a society need to invest in education and health care. They make the hard decisions to prepare for the decades ahead with a healthy, knowledgeable and productive workforce.

In Sacramento, when it comes to officeholders who really care about working people, we are talking about Democrats. We in the Building Trades know that most Democratic officeholders do their jobs with the interests of working people foremost in their minds, on the issues that are most important to us: prevailing wage, job safety, Project Labor Agreements and, of course, apprenticeship.

These same Democrats also have stood with the Building Trades in recent decades to build the skilled and trained workforce of the future. We don’t need to tell them that the apprenticeship component is crucial for the construction industry to continue to deliver projects on time, the first time and under budget at the lowest bid.

About three-fourths of California’s apprentices work in construction, and 92 percent of those are in our 230 joint labor-management programs. They earn good wages and gain the skill and training that they need.

These are programs that work, and they work because we do not do them on the cheap. We spend $100 million a year on instruction, to make them the best in the business. We know that it is money well spent. When it comes to the future, apprenticeship is everything. It is the next generation’s training, paid for by the men and women now advancing into well-earned retirement, a generation whose own training was paid for by the generation before it and by all the ones going back to when the Building Trades first took shape in 1901.

We know what can happen when working people are persuaded to vote against their own interests, as they have been by Republican political wolves dressed in sheep’s clothing in states like Michigan, Wisconsin, Missouri and Indiana. Once elected, these politicians turn against the workers whose votes they had courted. So-called “right to work” legislation gets enacted into law, paychecks get smaller and benefits are reduced for all workers. Prevailing wage comes under attack or is outright eliminated. Support for apprenticeship wanes.

As they are in every election, the stakes on June 5 will be very high for working people. To maintain the prevailing wage, to build apprenticeship, to forge the Project Labor Agreements that facilitate fair pay and benefit the skilled and trained workforce of tomorrow, we need to elect representatives at every level of government who believe in working people and who will protect their interests.

Blue-collar workers must vote in support of their paychecks and their families. They should only vote for elected officials that understand their struggles and dreams to own a home, see their kids succeed, and be able to retire with dignity.

Everybody should agree on this one: Yes on Proposition 69

Let Michigan Be a Lesson For All of Us